Registration Link: After registering, you will receive a confirmation email containing information about joining the meeting. 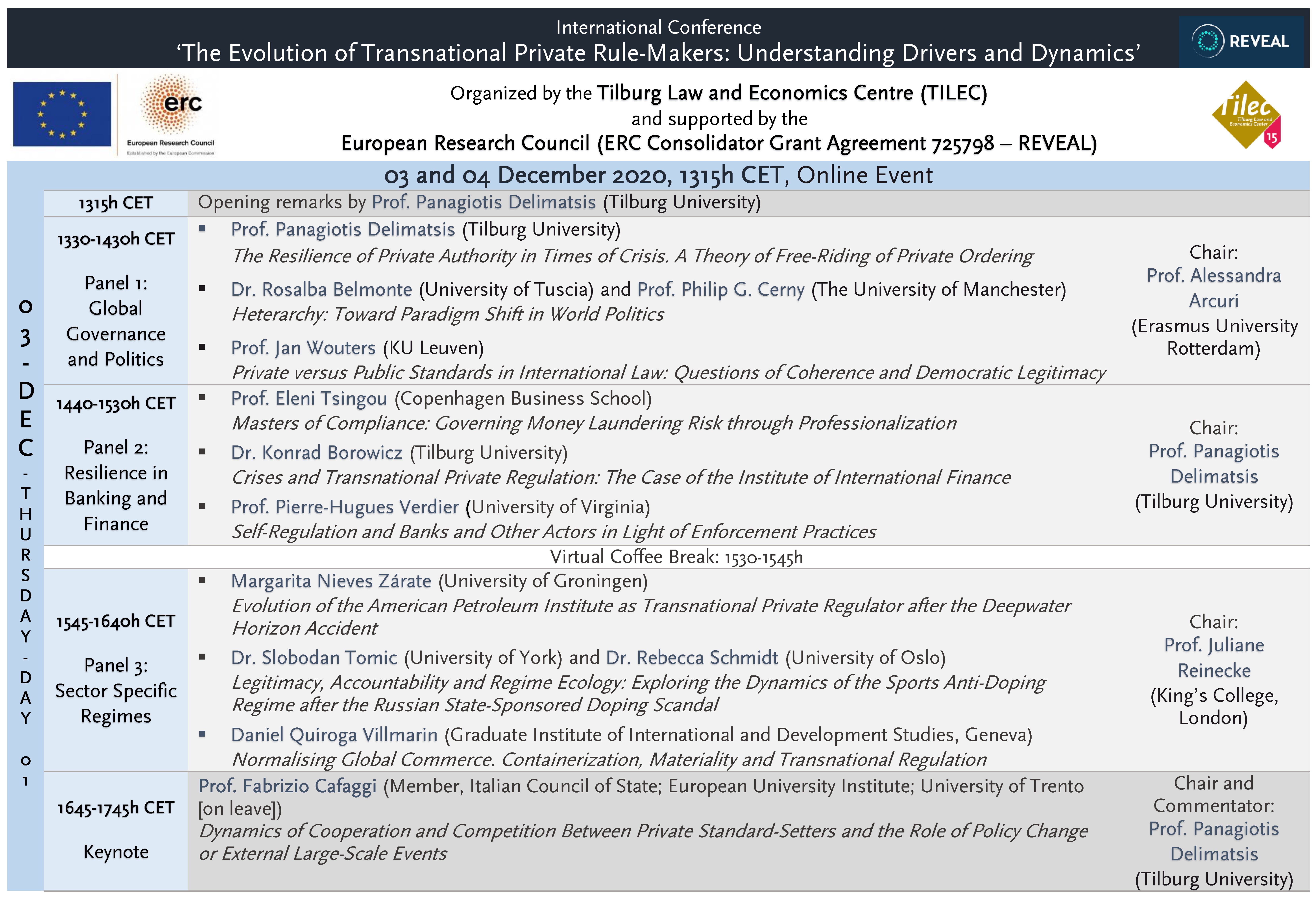 In recent decades, transnational private regulators and standard-setters have emerged and multiplied in domains traditionally associated with private rules such as technical and financial standardisation, as well as in areas considered as the preserve of public authority such as sustainability and food safety. Transnational standard-setters have acquired unrivalled influence in the regulation of product and financial markets alike in light of their epistemic power as well as specific organisational features. Scholarship from disciplines other than law, in particular from IR, has highlighted considerable flexibility of transnational rule-makers if compared to public institutions both in fulfilling rule-making functions and adapting and transforming in light of events calling for change. However, empirical accounts zooming in on the flexibility, evolution and resilience of transnational private regulators remain scant in legal and regulatory scholarship.

The goal of this conference is to explore how organisational forms, procedural rules, informal decision-making processes of private standard-setting organisations as well as outcomes of standard-setting have changed over time as a response to pressures and demands from within and outside these organisations. Private standard-setters have adapted not only to meet demands from both public authority at various regulatory levels and different stakeholder groups, but also to defuse internal opposition and to side-line specific interest groups with the gain of others. Specific events in their regulatory environment (be it a financial crisis such as the Asian contagion of late 90s and the recent Great Recession, a product safety crisis, a large-scale manufacturing glitch or a pandemic) have reinforced existing or created new incentives and rationales for private standard- setters to internalize the need for change, partly in order to maintain operations.

Increased attention to these evolutionary dynamics, their impact on the goals pursued by the organisation, as well as on the implications for targets and beneficiaries will contribute to shed light on the mechanics and dynamics of resilience of private collective action but also on the relation between public and private authority - in particular on the capacity (or lack thereof) of the former to effectively enrol, steer and influence the latter.

This conference is organised within the context of a 5-year research project funded by the European Research Council titled ‘The resilience and evolution of voluntary economic activism and the role of law’ (REVEAL). It will facilitate discussions on the continuous evolution, mutability and crisis- absorbing capacity of transnational private regulators and standard-setters from various perspectives. In particular, the aim of the conference is to gain a better understanding of the organisational features and other characteristics contributing to flexibility, adaptability, and ultimately resilience of transnational private rule-making. The conference aims at assessing empirically the dynamic evolution of standard-setting organisations as well as their rule-making output in relation to specific critical events in their regulatory environment. It focuses on the external regulatory dynamics and drivers for change, including crises, interactions with, or requests from, public authority, rules and legal regimes at various regulatory level (i.e. international, regional, national and sub-national), as well as the heterogeneity and internal organisational dynamics of these organisations and the impact on their resilience.

The organisers welcome the submission of papers that engage with the theme of the conference and discuss case studies from transnational private regulators and standard-setters in the domains of manufacturing, technical standardisation and finance, covering one or more bodies, and adopting a predominantly empirical and dynamic/longitudinal approach. Transnational bodies subject to inquiry may include, among the many, the International Organisation for Standardisation (ISO), the Institute of International Finance, GlobalGAP, the European Payments Council, the Marine Stewardship Council, the Roundtable on Responsible Palm Oil and private meta-regulators as well. Contributions may also focus on the supervisory authority side and investigate how public authorities react to changes undertaken by the private organizations they supervise in times of crisis. Legal, political science, sociological, socio-legal and multidisciplinary perspectives are equally welcome. Theoretical contributions are also welcome as long as their focus lies on the evolving dynamics and resilience of transnational private regulation and the underlying rationales.

Draft papers of no more than 8.000 words or extended outlines of 3.000 words together with academic affiliation should be submitted at project.reveal@tilburguniversity.edu by 18 September 2020. Submissions are invited from researchers at any career stage, and will be selected on the basis of originality and fit with the conference theme. Authors whose contributions are accepted will be invited to present their papers at the conference and to submit their full written paper (max 9.000 words) by 6 November 2020. The best contributions will be selected for inclusion in an edited volume on the theme curated by the organizers.